In stock In stock Pre-Order Out of stock
Gorz, the sticky - Orc LARP Sword - Calimacil He had heard it all. "Follow the Dark Lord" they said. "Be a good minion", they also said. But unfortunately our little Grush had something else in mind. He had no desire to lead the same life as his parents, and 214 other blood relatives serving in the Dark Lord's army.

What he wanted was to be an adventurer. Just like the Elves, Dwarves, humans and other races that delved in the dungeons his kind were sworn to protect. He wanted to be a hero, but nobody here could even begin to understand.

But his choice was made. That very night, he stole his father's sword, a unique piece with a straight blade, and rode off into the night to forge his dream.

The length and style of this LARP sword give it a nice niche use that is not covered by our other weapons of similar style, but it is, as always, just as safe, durable and beautiful as all our weapons made from our foam recipe.

This sword is a perfect fit in itself for any orcs, ogres or other monstrous dwellers of the lands of Evil. As well, it can be a great piece for character coming from more primitive culture, or to represent a very old relic that didn't age so well!

I don't know if I'd go so far as to say I'm disappointed by this weapon, but of all the Calimacil weapons I've received so far - this one is definitely the worst.

It looks great, and I did mostly buy it for its appearance, but swinging this sword is a pain. The grip is only as short as my Nymrael dagger, yet the weight of the blade is as demanding as swinging the Negative Space one-handed. That'd be bad enough, but I also have a burr in the center of my grip that the Calimacil crew must have missed, so each swing chafes a bare grip. Finally, the tip is pretty firm. I'd hate to get jabbed with one of these.

I feel like if the blade were reduced, Gorz would be an awesome weapon. As is, it's an awesome plot-hook, I guess. 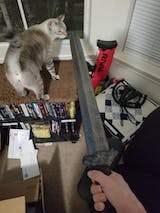