Legend In Seyrawyn’s universe, mages can develop several specializations. For example, on the island of Arisan, becoming a Gunner Mage is synonymous with distinction. Indeed, their abilities regarding spells and combat... Read more

In Seyrawyn’s universe, mages can develop several specializations. For example, on the island of Arisan, becoming a Gunner Mage is synonymous with distinction. Indeed, their abilities regarding spells and combat are as famous as they are formidable.

When a community is under siege by hordes of enemies, the Gunner Mages’ role is both to advise and support the Guardians of the territory. Much appreciated during combat, a handful of these valorous mages makes all the difference between victory and defeat.

The training of these wise warrior mages is rigorous. It is divided equally between the study of energy fields and spells, and the learning of the handling of the Gunner’s Staff.

Once they can master the art of throwing the Arcane Sphere, the mages are ready. These spell-casting warriors are sure to stand out on the battlefield, and  during the Mages Games.

Composition of the Staff

This fabulous staff comprises two distinct key elements. At the base, there is the heart of the sceptre and, at the other end, the receptacle shaped like a dragon’s head. The heart deploys its magic to the head in order to charge a magic projectile named Arcane Sphere.

The Heart of the Staff

The heart is an arcane orb located at the lowest end of the staff. It is encased into dragon’s claws.

The head of the staff is the receptacle into which the energy transferred by the heart is deployed to an Arcane Sphere, a magic projectile as coveted by the Gunner Mage as it is feared by the enemy.

Since many centuries ago, when times are peaceful, Gunner Mages play to train their warriors, to heal both the body and the spirit, to entertain themselves or to solve disputes between the tribes. The challenges are thus laid down during friendly jousts named “Tewaarathon*” or Mages Games. In fact, these tournaments give the opportunity for everyone to assist to healthy competitions where strategy, teamwork and staff handling abilities.

Inspired by the Lacrosse stick, the Gunner’s Arcane Staff is made from a curved core sculpted from solid maple, dyed, and varnished by hand. Circled with traditional babiche, the dyed leather pocket is attached to the wooden stick by leather lacing. On this frame, grips in the shape of a dragon were casted in Calimacil foam for an unequalled durability. 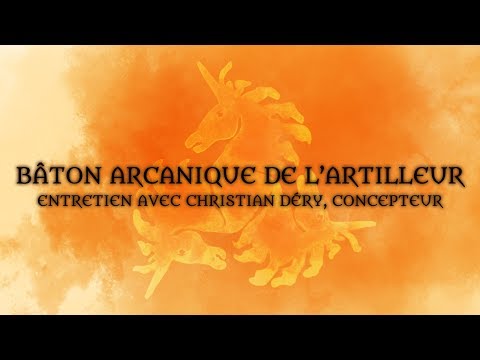 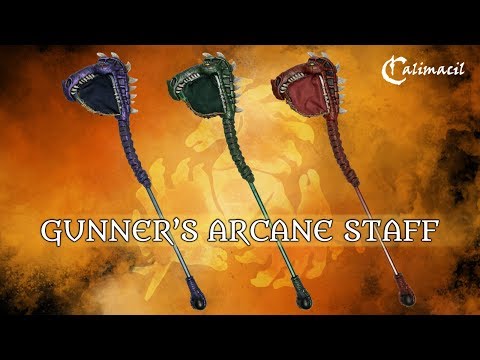 Reviews
Sort:
Most Recent
5.0
out of 5
5
1
4
0
3
0
2
0
1
0
Hmm... you don't seem to have purchased this product yet to be able to leave a review.
You have already reviewed this product. If you would like to edit your existing review then please contact us directly.
Something went wrong! Please try again!
C Verified Buyer
Christopher F.
Verified Buyer
May 21, 2019
Perfect fit for a niche role
The Gunner's Arcane Staff certainly isn't your standard weapon, and isn't for everyone. However, it fills a very specific niche role that otherwise has little to no commercial opt... view moreions. The weapon is incredibly well made as expected for anything sold by Calimacil. The core is solid wood, amply exposed to accommodate even the largest hands. The dragon sculpt is nice and soft, adding a layer of safety in case you accidentally hit someone while using the weapon. It handles well, and can send the recommended Arcane Spheres and regular packets flying clear across a field with high accuracy after a little practice. The only complaint I would have is that the orb at the pommel end of the staff is a bit harder than I'd like, but that's incredibly minor. Definitely check in with your administrators if your game or event has strict rules/regulations regarding weapon build. view less
0
Load more
0
Store Response
Sunday,Monday,Tuesday,Wednesday,Thursday,Friday,Saturday
January,February,March,April,May,June,July,August,September,October,November,December
Not enough items available. Only [max] left.